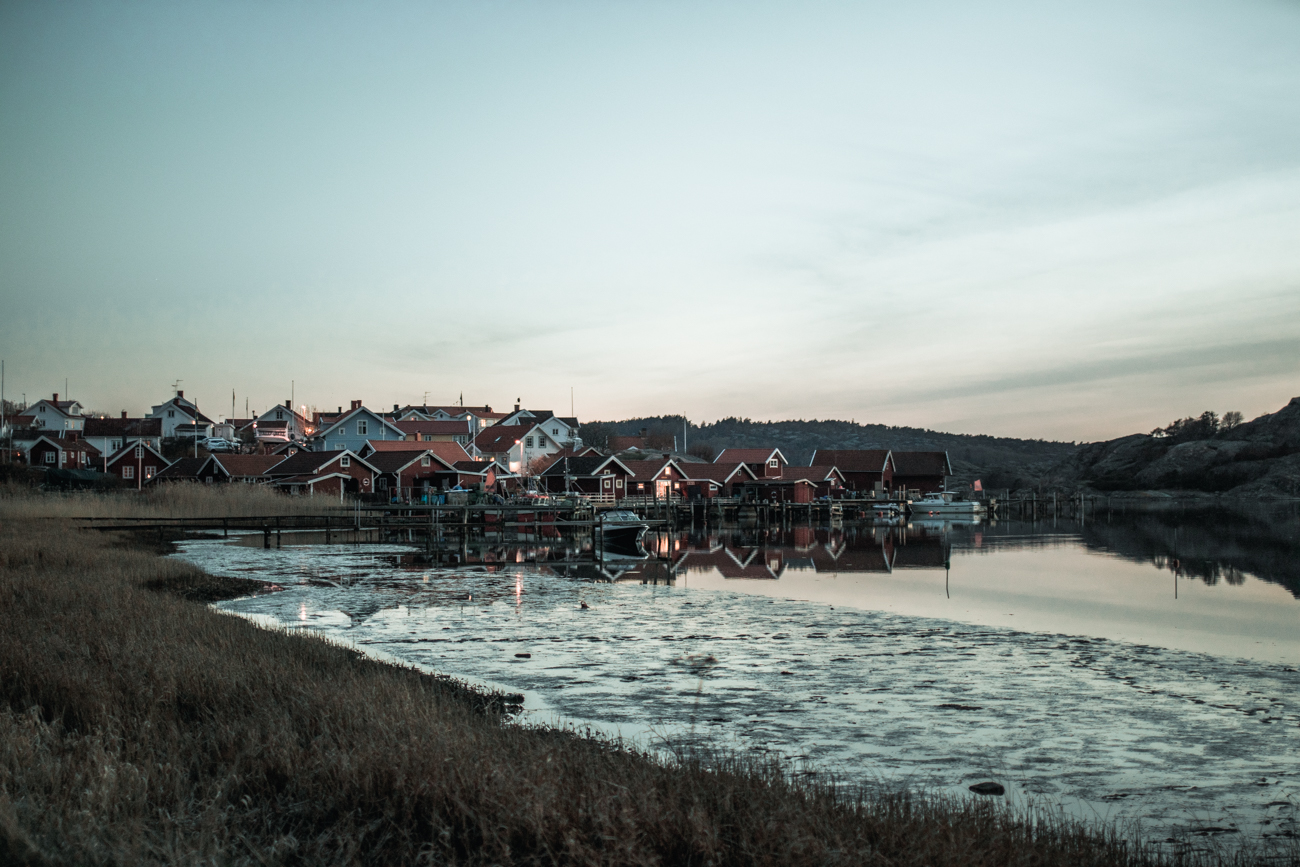 We hit the road on early morning Thursday before Easter. We drove to Sandefjord to catch the ferry to Strömstad, after 2,5 hrs we were already in Sweden. Landscapes are not much different from Norwegian, but they seem to be less diverse, or it’s smoother would I say (if that can apply to landscapes?).

We haven’t had a strict plan, we just knew we want to visit Fjällbacka, Smögen and Gothenburg. Once arrived to Fjällbacka and got to know this little village a bit we decided that we’re gonna focus on this one the most. It’s a picturesque touristic place, that used to be a fishing village (some people still make their living out of fishing though).

First thing we actually did was climbing the mountain called Vetteberget which is divided in half by Kungsklyftan. Kungsklyftan is described as ”a cleft that has huge stone blocks wedged in like a roof” I personally call it ‚Small Kjerag’ 😉 View on top overlooks the sea and the mainland.

There is also very nice church on the hill, small restaurants, ice cream places, narrow streets and the entire coast to stroll.

However the most entertaining place (for us) was wooden fishing house, where a kind man rents kayaks! I was so much looking forward to it, but we did that on our way back to Norway. Anyway we rented the kayaks and paddled all islands around, seeing birds reserve and chilling on the island without a single human being! After that we got back to our kayaks and paddled to the pier where we ’parked’ our kayaks and went to eat fish&chips, drink a beer and enjoy the sun (of course we got sunburned 🙂 )

After meeting Fjällbacka we drove down to Smögen, which is another popular tourist place on the west coast of Sweden, however that was not the season yet – so Smögen was not crowdy at all. Over there we took long walk going through all the small island connected with wooden bridges. It’s actually one long wooden pier. This place is located on the west coast of Smögen itself – you can lookup in maps for Klevenvägen.

After this stroll we went down to the Smögenbryggan which is quite famous because of its colorful small boathouses and fishing huts. Must see 🙂

After spending nice afternoon in Smögen we hit the road again and headed towards Gotheburg. Over there we started in Slottsskogen Park, which is huge green area where you can even get chance to meet moose or…penguins! After getting lost in park we headed to botanical garden, which is big and amazing, although most of plants didn’t blossom yet. Anyway there are some epic (!) paths up to The Rock Garden, as well as arboretum or tropical garden house. We drop in there only for 5 min before closing, but still got chance to see awesome collection of cactuses.

From botanical garden we walked to the oldest neighbourhood of Gothenburg called Haga. Once getting closer to Haga I noticed similarity to Amsterdam’s architecture and was not wrong actually. Gothenburg’s architecture was influenced by dutch architectures at the beginning of 17th century.

This day we walked 15 km, so taking train from botanical garden to Haga is idea to be considered. But the day was so sunny and warm that we couldn’t resits from walking. After Haga we came back to our car and drove further to enjoy sunset on the Näset Beach, spent the night camping in the area and started with Volvo Museum in the morning. It’s a great museum, rated 5/5 by me and 4/5 by Mariusz. If anyone driving a Volvo or interested in motorization I would strongly recommend it 😉 After that we’ve finally got to the city center, chilling around, walking down the streets and looking for famous (and stinky) Surströmming. We did not find them in the end (been told it’s not season now?)

We decided to leave in late afternoon and drive back to beloved Fjällbacka. The rest of the story I described above, but we spent the whole day in the village leaving around 1700ish to catch ferry back to Norway. We arrived too late to drive home for 3 more hrs, so decided to extend our Easter camping for one more night staying in Larvik 🙂

PS: There is much more to see in Gothenburg like Universeum, National Museum, Museum of Gothenburg or Hasselblad Center (if anyone interested in photography) – we run out of time.

Posted by pol
All posts